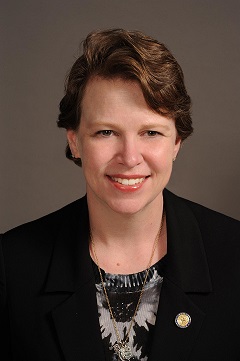 Councilwoman Young was first appointed by Mayor David Holt to the Oklahoma City Airports Trust in May 2021.

Barbara’s eldest brother has worked in the aerospace industry since 1985, peaking her interest in the industry for a very long time.  The councilwoman has two of the three OKC Airports in her Ward 3 area as well.

Barbara was born at Keesler Air Force Base in Biloxi MS where her father later retired from his service in the United States Air Force.  Returning his family to his native Oklahoma in 1986, Barbara graduated from Putnam City High School in NW OKC.  From there she went on to receive her Bachelor’s degree from the University of Central Oklahoma in Edmond.  After graduation, Barbara became a dispatcher for the Oklahoma City Police Department.  During college and after OKCPD, Barbara worked in the construction industry for more than 20 years with the majority of that in Development with OKC’s own Love’s Travel Stops & Country Stores, Inc. Barbara’s 3 children were raised in far west Ward 3 since 2007 where they all graduated from Mustang High School.

In addition to her employment and Council responsibilities, Councilwoman Young enjoys serving the city in the following additional capacities: