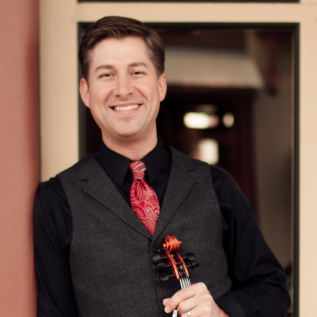 Peter Markes (pronounced Marcus) is fast becoming known as OKC’s “Live-Looping Violinist,” using his violin to create pop hits from scratch live in front of audiences. Also the guitarist with the band, Kyle Dillingham & Horseshoe Road, Peter has performed throughout the world in nearly 30 countries, and in 2019, the band will have their debut performance on the Grand Ole Opry in Nashville, Tennessee.

A career teacher, Peter was named the 2014 Oklahoma Teacher of the Year and served fifteen years as director or orchestras at Edmond North High School. He has performed twice with the Edmond North Orchestra in Carnegie Hall and at the prestigious Midwest Clinic in Chicago. Resigning from teaching in 2017, Peter now writes and performs full time, and in 2018 released his first solo album, I Have a Dream, available on his website or digitally worldwide.  He lives in Oklahoma City with his wife, Kris, and their two sons. Learn more at www.PeterMarkes.com, www.YouTube.com/PeterMarkesMusic and on social media @PeterMarkesMusic.