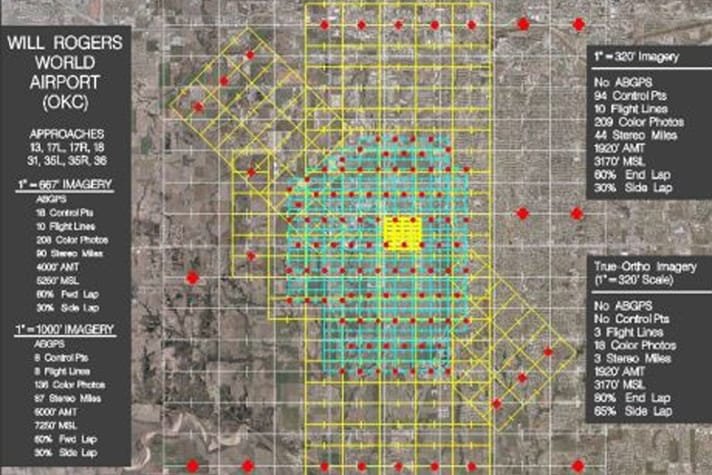 The A-GIS project is an initiative of the FAA to create a nationwide electronic Airport Layout Plan (ALP) using Geographic Information System (GIS) technology.  Will Rogers World Airport is one of five airports chosen for the pilot project phase of this initiative.  The project consists of three parts: (1) obtaining high resolution aerial photography of the airport; (2) performing an accurate, detailed survey of the airport; and (3) digitizing all relevant airport features along with inputting attributes to describe the features.  The exact procedures needed to complete these phases are defined by FAA Advisory Circulars, AC 150/5300-16, -17, and -18.

Will Rogers World Airport is well on its way to completing this project.  After applying for and obtaining a federal grant for the work, Jacob’s Engineering was selected as the primary consultant.  In August of 2010, after a three month delay waiting for ideal weather, the aerial photography mission was flown by Aerial Data Services, providing up to 3” pixel resolution imagery.  In November and December of 2010, survey control points were established using Real Time Kinematic (RTK) GPS.  Runway centerline and Navigational Aid surveys were also performed.

Currently, Martinez Geospatial, partnered with Jacob’s Engineering, is busy with ortho-rectification of the aerial imagery and digitizing of surface features of the airport.  Orthorectification will reference the Will Rogers World Airport data and all other airports to a real world coordinate system that will allow airports and air traffic to be monitored and managed under the FAA’s Next Generation Air Transportation System.  In addition, the detailed and accurate data will provide each airport with GIS data tools to better manage their assets and plan for long range growth.